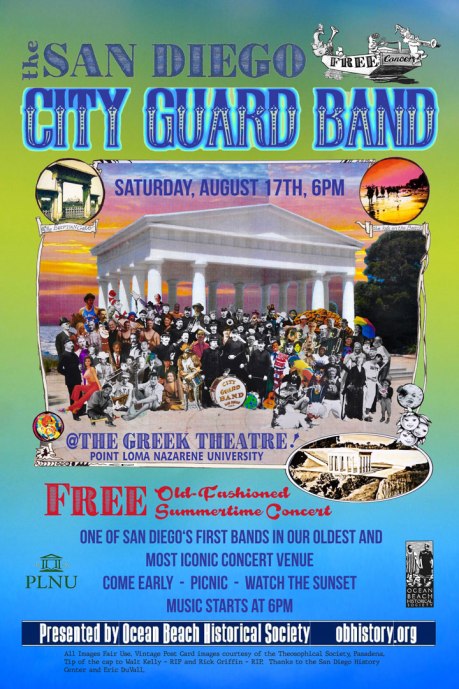 The Ocean Beach Historical Society presented a Special Event:
San Diego City Guard Band – At the Greek Theatre
Sat., Aug. 17, 2019 at 6 pm At The Greek Theatre at PLNU The Ocean Beach Historical Society continued a yearlong celebration of our 25th Anniversary, as we presented “the event of the season”: The San Diego City Guard Band in concert at the famous Greek Theater at Point Loma Nazarene University.
The City Guard Band has entertained San Diego audiences since 1885! Performing band music from the turn of the 20th Century, patriotic music from the First World War, more contemporary show tunes, and everything in between.
The concert took place at the Greek Theatre, one of SD’s most iconic venues, with a view of the Pacific Ocean!
Built by Katherine Tingley in 1901, the outdoor Greek amphitheater was the first built in the U.S.A. Tingley, the leader of the Theosophical Society, purchased this property in 1897 and founded the Theosophical community of Lomaland.
Lomaland is now the site of Point Loma Nazarene University, which overlooks Sunset Cliffs Natural Park.
The crowd enjoyed this FREE old-fashioned summertime concert. Thank you food venders.

One thought on “Was Great! Aug. 17- SD City Guard Band At The Greek Theatre”